I am working with a large set of Sentinel-1 images, all GRDM, and I am having some issues with the alignment of images. I am working with a mix of ascending and descending orbits, but it appears that some of the images are slightly shifted by 1-5 pixels.

Has anyone experienced similar issues?

You could add coregistration of all images after terrain correction (select geolocation instead of orbit in the second tab) to match the images.

Why exporting to GeoTiff by the way?

Exporting to GeoTiff to run python scripts based in gdal for further analysis - I wondered if it could be the conversion to tiff causing the issue, is there another file format that may be better for maintaining alignment?

You can apply gdal/python directly to the .img file in the data folder of the BEAM DIMAP format.

Thanks for the help! I’ve been working through the coregistration steps in SNAP but I end up with blank slaves after cross-correlating. Is is preferable to subset the images prior to coregistration so that they have similar extents or is it okay to stack anyways?

can you please post the image IDs you use for the coregistration?

I have tried a couple different set-ups, currently just on a few images until I process all in my dataset.

All the images that I have been testing have been calibrated and terrain corrected but still use the full extent.

hm, I haven’t worked with EW data so far but if you already terrain corrrected them, you should select “geolocation” instead of “orbit” in the initial offset method.

If that doesn’t work, increase the number of GCPs and the coearse coregistration window.

If still no success, you can select radar > coregistration > stack tools > create stack
Maybe this is already sufficient (given that the terrain correction worked well)

There was no change as a result of stacking - maybe I missed something in terrain correction that caused the images to be unaligned? I used the ACE30 DEM, my only thought is I am working at a high latitude, maybe it affected the results? I attached an image of a swipe comparison of two terrain corrected results in PCI Geomatica and it is obvious there is some misalignment looking at the small island in the lake. I have checked both projections and they are still identical, the bounds are slightly different due to the different path and orbit which I think may be the root of the issue. 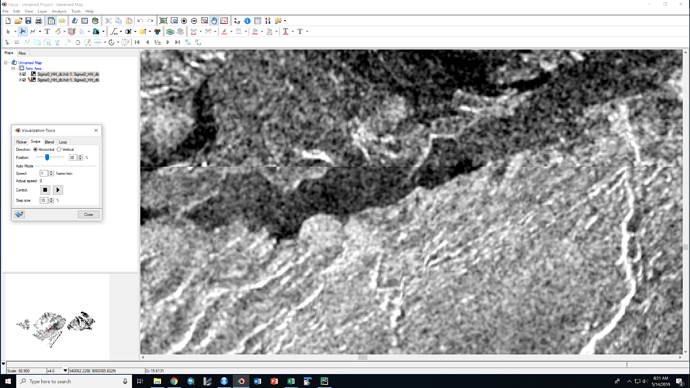 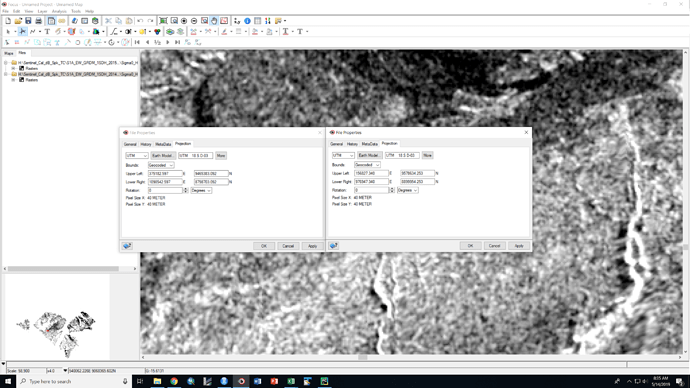 Just as reference, in case I did miss something, here is a screenshot of my parameters for Terrain Correction 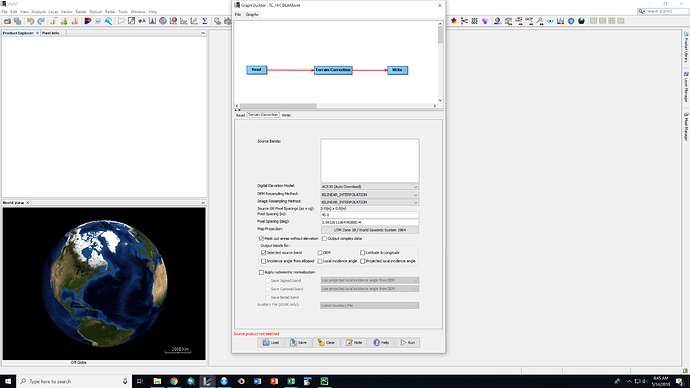 so are the images already empty after the terrain correction? Or does this happen during the stacking/coregistration?

The empty images happened after stacking/coregistration, however, the most recent run was successful but the images were still misaligned even after coregistration.

you can try terrain correcting using the ArcticDEM: https://www.pgc.umn.edu/data/arcticdem/
which is of considerably better resolution.

Thanks! I will give it a shot and see if it improves, just downloading the necessary tiles for my specific site.

Any tips on how to speed up the Terrain Correction processing? I think due to the finer spatial resolution (currently trying the 10m DEM) its slowing down significantly, with the large dataset we have the processing time is not realistic. Is it better to just use the >100m DEM?

good DEMs grant better terrain correction. If there is no severe topography in your study area which distorts the image (sharp ridges, faults…) you can also use one of lower spatial resolution.
Use the GoogleEarth export to check the accuracy.

Usually, the DEM-based data is very useful to co-register the series of Sentinel-1 images. But, if it possible, I prefer to use the vectorized shape files (e.g., rivers ,roads, buildings) to georeference all of the GRD images within ArcGIS. It is really a painful work to perform this process, but the georeferenced images seem wonderful when overlapping with the Landsat 8 images and the other satellite images.