I have a single SLC image, and my study area is within IW2 and IW3 subswath, bursts 3 to 5. I have performed S1 TOPS Split on each subswath, and I want to perform SLC to GRD process, but on merged bursts.

I have tried S1 Slice Assembly, but did not received a desired output. I am guessing that there are some steps I’ve missed.

Thank You for any help!

First thing, instead of converting the SLC to GRDH, the last mode is most probably available for your AOI, In this case you have the GRDH, you could subset your AOI directly,

But in case you’d stick on this method for some reason,

Slice assembly operator is design to merge the two subswaths belong to the neighbor images, However, merge operator is the right one for merging the subswaths within the same image.

The steps of converting SLC to GRDH

or directly SLC to GRD, take a look at this post,

Thank You very much for the answer. The reason I did not run S1 TOPS Merge is because it needs debursted imaged as an input. And in the SLC to GRD algorithm one of the steps is also Deburst.

So should I deburst both of the subswaths, the merge them into one and continue manually with Multilook -> Speckle -> SGRG -> GRD (leftover steps from SLC to GRD algorithm)

I want to test the difference between GRD and SLC to GRD image.

I have a single SLC image, and my study area is within IW2 and IW3 subswath, bursts 3 to 5.

So should I deburst both of the subswaths, the merge them into one and continue manually with

The AOI you’re intend to convert to GRD, is located within the IW2 and IW3 bursts 3 - 5

In this case the first step is to Split the IW2 burts 3 - 5, and then convert it using the operator, No need to implement the Deburst step separately because it’s already included within the operator,

Similar thing should be applied to the IW3 bursts 3 - 5 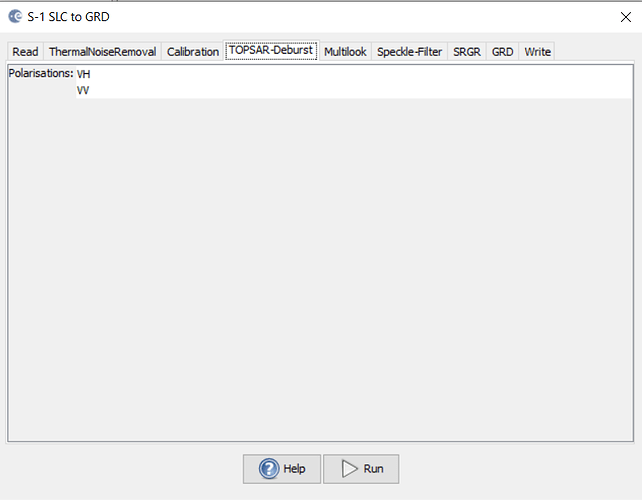 And then at the end, when I have GRD_IW2 and GRD_IW3, is it correct thing to do S1 TOPS Merge?

As I explained in my aforementioned post, Source of the post it’s possible to split and merge both then use the result as an input read of SLC to GRD operator,

Then apply merge to the results,

Finally the result of the merge step , is the the input of the SLC to GRDH operator.

The thing is why I wanted to avoid Slice Assembly is because it does not assemble the both sub-swaths, it only leaves the last file selected in the algorithm window.

I am working on the newest version of SNAP software. Everything else is working fine (after Slice Assembly I’ve tried SLC to GRD but the output is only one sub-swath as a GRD product).

Sorry I edited my previous post, please take a look, I was thinking that you have two neighbors’ images, that’s why I proposed to you applying slice assembly.

But you have only one image with IW2 AND IW3 , in this case the merge operator is the solution. Please let me know if it works.

Hello @falahfakhri, it does not work, because of following reasons:

Is there some workaround to overcome this problem?

Is there some workaround to overcome this problem?

Yes, you could implement it in GPF, to build graph of converting the SLC to GRD, has all the operators except of TOPSAR-Deburst.

I asked this also as independent question, where can I find in a Graph Builder last algorithm named GRD? Everything else I can find for the GPT, and then I think this problem could be solved.