Dear Friends,
I got error message when trying to import Dual Pol ALOS PALSAR-2 in PolSARPro v6. software. I did not have problems when working on Quad Pol. Please help. thanks 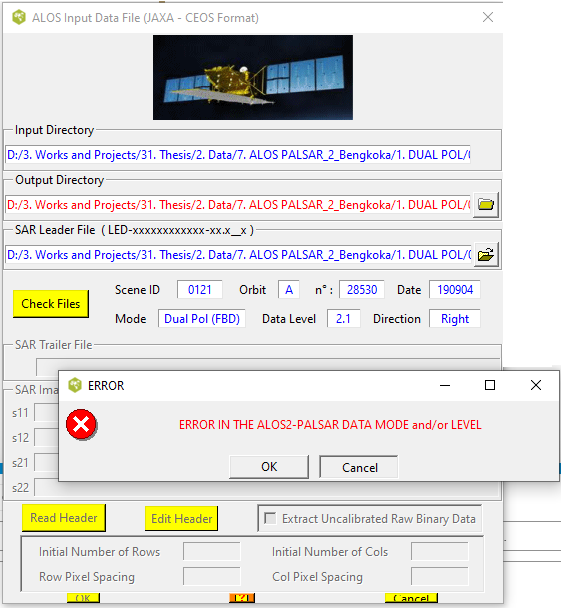 what is the file type of the dual-pol data?

I inserted the LED file. see picture the content of the data folder.
@ABraun 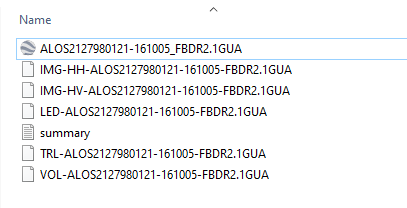 where is this data from?

Looks slightly different on my side

I am able to import it 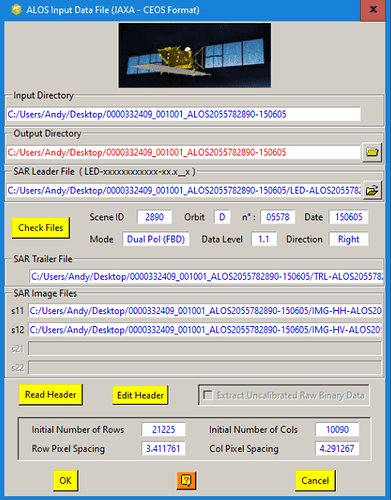 @ABraun
I got it from my professor the data downloaded from ALOS JAXA.
Your data is 1.1 level mine is 2.1 also your data type is D while mine is .1GUA
Im not sure if that are the reason for error. Mode is same as yours.
Meanwhile my Quad Pol data is 1.1 level.

@ABraun
I managed to open it in SNAP and wanted to do decomposition processing. Please suggest how can I process my level 2.1 data.
thank you 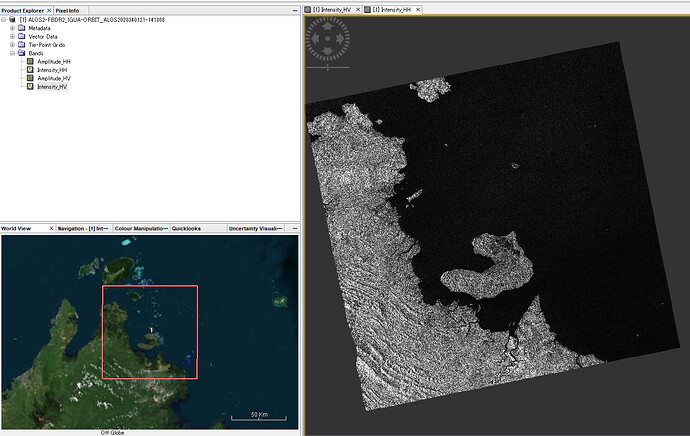 what is your aim with the data?

Higher level products have inherent changes (regarding geocoding and data type) which cannot be reversed. SNAP v8.0 - is geocoding ALOS-2 PALSAR-2 L1.5 geotiff a possibility with this version?

I wanted to get the backscatter, volume, RVI and Pol Decomposition.

Sigma0 might be possible (Radiometric Calibration), but RVI and decompositions are technically impossible because they require the complex SLC information. Please ask your supervisor if there is a chance to get the Level 1.1 data of these products.
Also, RVI and decompositions based on dual-pol data are not comparable to the results gained from quad-pol because they are based on two polarizations only.

Please suggest or give me link on what can I do with this level 2.1 data. The main purpose are for studying the forest.

This is a quite general description, can you please specify a bit more?

Your method should determine the selection of data, not the other way round.

@ABraun
How can I georeference the processing output of the quadpol. Is there any function to do it in Polsar pro or I just do it in envi software.

have you seen this tutorial? SAR Polarimetry and Analyses

When the quad-pol data is Level-1.1 you can do all processing in SNAP.
SNAP only has problems with Level-2.1 data which is already geocoded. There was a work-around reported in this topic which works on higher level products: ALOS-1 L1.5 Terrain Correction

@ABraun
Yes I did.
Ok thank you. I will read the topic. Basically here is how the outputs look like. 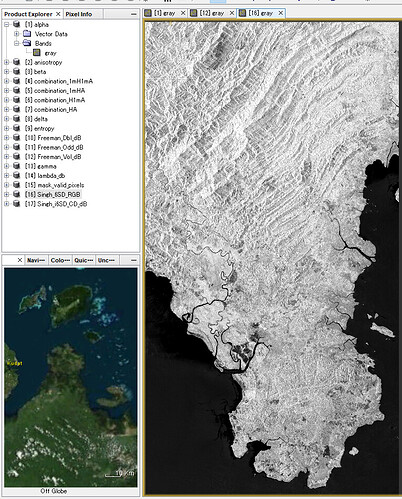 where have you generated these raster bands?

Generated from from PolSARpro v6.

I see. Many of these parameters could be derived directly in SNAP which would bring the advantage that subsequent terrain correction is no problem (as shown in the tutorial).

A tutorial on the exchange of data between PolSARpro and SNAP is planned, but not to be released within the next weeks.

Ok, im reading the forum posts about the “trick” still trying to understand what exactly it is meant. Also installed the ASF MapReady and trying to figure out how to use it to do the georeferencing. Hope you can share with me the tutorial when it is available soon. thanks