I want to highlight an issue with the Terrain Flattening operator when using an external DEM.

The external DEM I’m using here is created from the same Copernicus 30m Global DEM tiles that SNAP uses when selecting the ‘auto-download’ option, which are stored locally in the /.snap/auxdata/dem/Copernicus 30m Global DEM directory. I created a VRT file of the relevant tiles first and used the following command to create the DEM with WGS84 ellipsoidal heights:

In the following comparison of processing results, I used exactly the same workflow and parameters, except for using the auto-downloaded Copernicus 30m Global DEM in one and the external DEM with externalDEMApplyEGM=false in the other for the Terrain Flattening and Terrain-Correction operators.

Terrain effects are clearly visible in the results processed using the external DEM:

Here is the hillshade for reference: 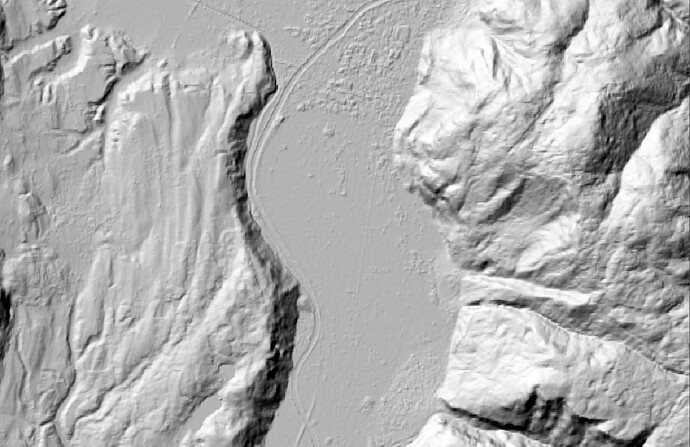 Furthermore, I selected the option to output the DEM in the Terrain-Correction step. Comparing the hillshade of both results shows a pixel shift, which might be related to this problem:

In the last months a few other reports have pointed to issues that might be related:

This is a known bug. The fix was supposed to be included in the last patch release in Dec. 2021, but was not included. Using an external DEM created from the Copernicus DEMs is a work around. I expect the fix will be included in the next patch release. Oversampling just averages the zeros with the surrounding pixels which suppresses the effect: visually less apparent, but the values are altered and not correct.

Dear all, I want to highlight two problems that regard pixel alignment as well as DEM resampling during Terrain Correction and would be interested in the opinion and experience of others. I will try to structure my post in a way that hopefully it’s clear by the end what the problems are and which open questions remain. Basic workflow and TC settings: The following workflow and TC settings were used for all runs using the same SLC scene. The settings of all other nodes also stayed the same of …

Here are some of my observations about the Range Doppler-based Terrain Correction in the latest version of SNAP 9.0.0 using one Sentinel-1A SAR image and one ICEYE Spotlight SAR image: If I go with the option of “Copernicus 30m Global DEM (Auto Download)”, it works fine. The tool will download a copy of the original Copernicus 30m (in tiles) to a folder like this “auxdata\dem\Copernicus 30m Global DEM”. NOTE these DEMs are still with original vertical datum (i.e., with EGM2008). If I go with t…

S1TBX 8.0.6: I observed that Terrain-Flattening and Terrain-Correction of Sentinel-1 using auto downloaded Copernicus 30m DEMs was not the same as using a Copernicus 30m DEM as an external DEM. Auto download is introducing a 1/2 pixel and 1/2 line shift to the DEM. I verified this by manually shifting the external DEM by that amount. I obtain the exact result as auto download with the external DEM after shifting the georeferencing by the 1/2 pixel and 1/2 line: (0.000208333333333,0.000138888…

Almost identical results are obtained when using External DEMs with different vertical reference (WGS84, EGM2008, EGM96). However, products produced with/without “Apply Earth Gravitational Model” in SAR-Simulation are misregistered by one 20m pixel east/west. We believe that externalDEMApplyEGM should not have this effect. Use of the same Copernicus GLO30 DEMs via auto download results in images shifted one 20m line south relative to the externalDEMApplyEGM=false images, and one 20m pixel east …

Thank you @maawoo we will look further into this.

First off EPSG:4326 is only a horizontal reference, so your gdalwarp command may not be correctly converting the elevations. -t_srs EPSG:4979 is 3D and should convert EGM2008 vertical references to WGS84. Regardless, the small elevation difference between EGM2008 and WGS84 is not causing this issue, and may not have any effect on Terrain Flattening.

The posts that you reference are similar. One key issue that @jun_lu noted is that lower resolution external DEMs must be oversampled to the output image resolution (or greater resolution). I believe this may be automatically done for autodownloaded DEMs.

you’re right that EPSG:4979 would be a more suitable CRS in this case but I made sure that vertical heights were actually corrected. We use the MGRS tiling system in the project GitHub - SAR-ARD/S1_NRB and reproject to UTM zones, which are also 2D.

One key issue that @jun_lu noted is that lower resolution external DEMs must be oversampled to the output image resolution (or greater resolution). I believe this may be automatically done for autodownloaded DEMs.

Our external DEMs are resampled to the pixel spacing of the output image (10 m) before processing starts. I wanted to keep the example above simple but also noted that I changed the oversamplingMultiple parameter without any improvements.

I just did some experiments myself geocoding to UTM with a spacing of 100 m. DEM used is Copernicus 30m. I considered three DEM input scenarios:

The UTM DEM is definitely inferior. SNAP performs an internal resampling step (which is unnecessary since the DEM is already in the target projection and spacing) causing some additional smoothing.
The LatLon external DEM performs much better so it is actually better to keep the DEM in the original CRS and resolution saving some reprojection time and in this case also ingesting a DEM in higher resolution than the target SAR pixel spacing into the workflow.
The auto-download option performs even better. The comparison of the output DEMs confirms @maawoo’s findings. The pixels do align but there is a clear shift in values likely causing the lower RTC quality using the second DEM.

Dear @mengdahl, any update on this issue?

@junlu if there’s no JIRA-ticket for this issue it should be created now.