I’m looking into how Terrain Flattening is done in SNAP vs GAMMA. In GAMMA the output is masked out when layout or shadow errors are detected, but I don’t see anything like this in the TF operation in SNAP.

This post says that shadow areas can be estimated using the SAR simulation operator. Can it be used to mask out potentially erroneous areas?

Does this solve your question?

If your DEM is good, Terrain Flattening is able to reduce radiometric distortions at slopes. Areas facing towards the sensor produce higher backscatter than areas facing away from the sensor. Terrain Flattening is able to correc that.
Both Range Doppler Terrain Correction and SAR Simulation Terrain Correction do the same: They correct for geometric distortions caused by topography. But they cannot restore information pixels affected by layover, foreshortening or shadow.
The difference is that SAR Simulation allows to output the potential shadow areas.

I made a comparison of S1 products processed with and without Terrain Flattening: S1 radiometric correction

Thank you, this is clear now.

We also would like to compare RTC output from GAMMA vs SNAP. Out users have some validation metrics in mind, but I wonder if you could recommend any existing comparison approaches.

@johntruckenbrodt and his colleagues published an interesting study on the effects of Terrain Flattening on image radiometry in SNAP: Data | Free Full-Text | Towards Sentinel-1 SAR Analysis-Ready Data: A Best Practices Assessment on Preparing Backscatter Data for the Cube
Maybe you can adapt some of their measures.

Thank you, this is very useful. Interestingly, the SNAP graph (Figure 4) includes both TC and TF.

Hi @simonf,
TC and TF are both included because they fulfill different purposes. @ABraun’s message explains it quite well, TC is a geometric correction and TF a radiometric one. In optical remote sensing terms TC is basically geocoding and TF topographic normalization. Although in a stricter sense there is more to it due to the special SAR imaging geometry. It is also better to first do TF, it just works better in a SAR geometry prior to geometric corrections. Hope that helps.
Cheers,
John

Thank you, John, I misread something earlier.

While we are on the topic, can someone clarify the difference between the Range Doppler Terrain Correction and the SAR Simulation Terrain Correction operators? Does the latter call the former as one of the steps, or are they doing different things?

To my understanding SAR Simulation TC is best described as an refinement step of RDTC. If your orbit state vector (OSV) data is accurate enough you don’t need to do SARSim. With older sensors however it is a good idea as OSV data is less accurate resulting in location inaccuracy.
SARSim just adds another step wherein a SAR image is simulated from the DEM in the imaging geometry of the actual SAR scene. The SAR image is then co-registered to the simulated image and then warped to the map geometry of the DEM using a lookup table created during SAR image simulation.
However, the most accurate available OSV data, which SNAP automatically loads from the net, is still helpful as it reduces the complexity of the cross-correlation and image warping.
So basically, for Sentinel-1 RDTC is completely fine. It is less computationally demanding and is accurate enough.

Interesting, thank you. My only concern is that the SAR Simulation step seems to be the only one producing the radar shadow mask, which I’d like to apply to the result of TF. But for initial experiments I don’t mind running SAR Simulation as an extra step.

Mh, good point. You could export the local incident angle map from TC and compare it to the shadow mask. It should be accurate enough to just mask the SAR image to an incident angle range.

John - not quite sure what you mean. If an area is in radar shadow behind a mountain, how can incident angle alone tell me that?

@simonf the local incidence angle includes topographic variations. Areas which lie in the radar shadow should have the same incidence angle because they systematically face away from the sensor.

Here’s a random example of how this looks like: 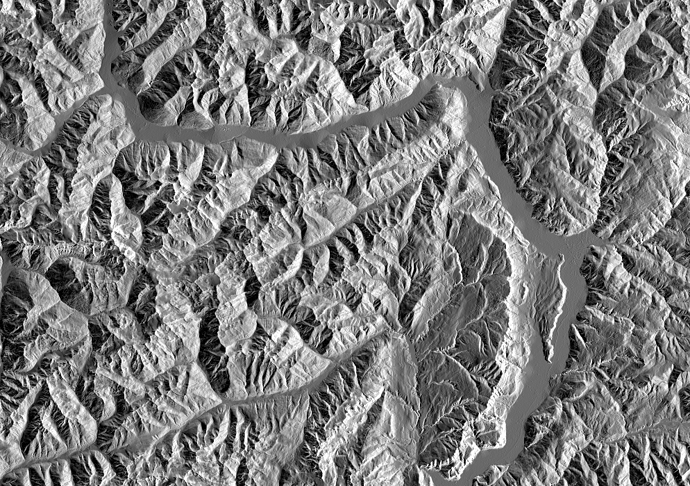