Problem with Snappy and error

I get the followng error
Traceback (most recent call last):
File “<pyshell#6>”, line 1, in
from snappy import ProductIO
ImportError: No module named snappy

Welcome at the SNAP community siavash82ir!

Probably the part in the section Configure Python did not work.
Maybe you have more than one Python installation and you have configured a different one as the one you use with your script.

I have same error, firstly I have installed miniconda 3.7, then I created py2 environment, during installing SNAP, I selected python2 as python executable,

Firstly I navigated to the snappy folder and activated py2 , and execute python, then I tried this command $ from snappy import ProductIO

But I got an error, so how to activate snappy in order to use it? 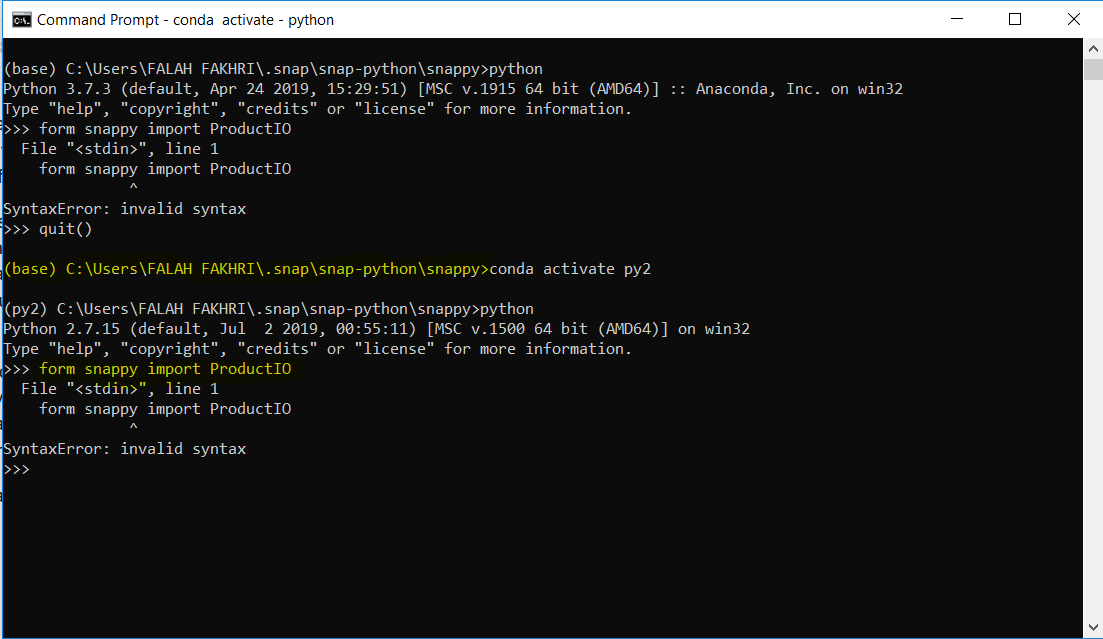 Also might be @johngan and @ABraun they could give some hints

it is from and not form

Yes, I mistyped it, but still I got an error, the error is,

Even when I tried up to append sys, the same error, 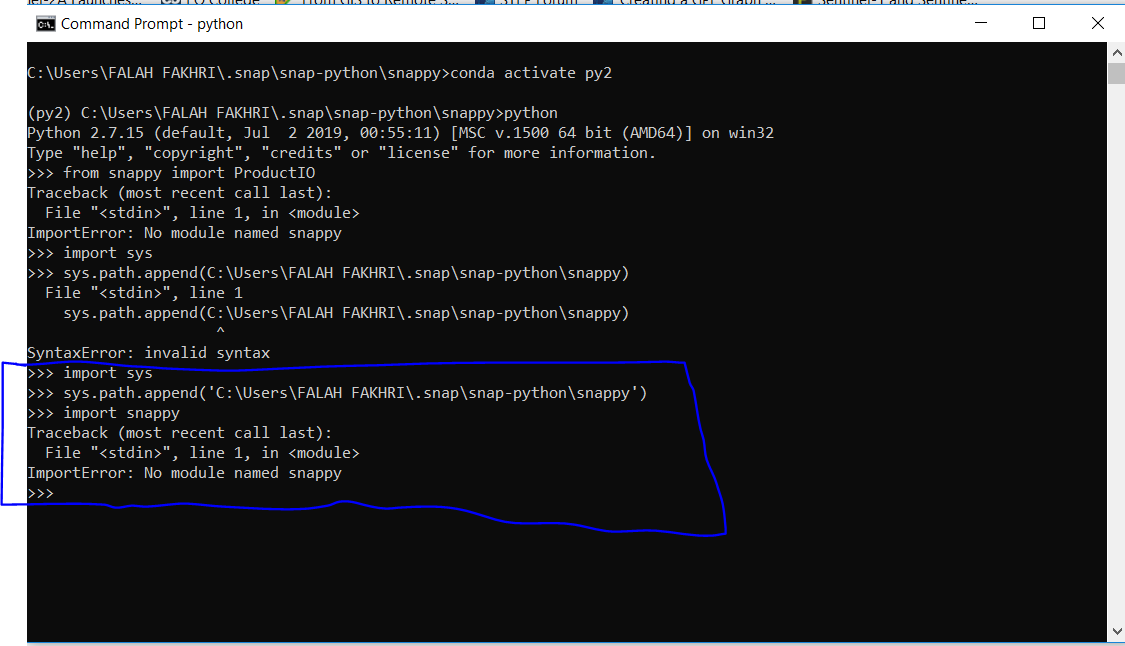 In case you created a python2.7 environment (py2) a new directory should appear in anaconda\envs\py2 with a python.exe in it.
When you configure SNAP for the use with python as in the link above you have to make sure that you use this path, e.g. like this:
snappy-conf C:\anaconda\envs\py2\python.exe

It seems that snappy has not been properly configure. You have mentioned that you use anaconda, so, you can create a virtual environment and install snappy in there. You can do the following:

now snappy module is contained in the conda virtual environment.

I hope that helps

you have to make sure that you use this path, e.g. like this:
snappy-conf C:\anaconda\envs\py2\python.exe

I already configured the py2 during the SNAP installation,

My snappy is available in the following path,

I tried to apply this code,

conda create -n snappy python=3.4 but I got the following error, so what do you suggest in this case, 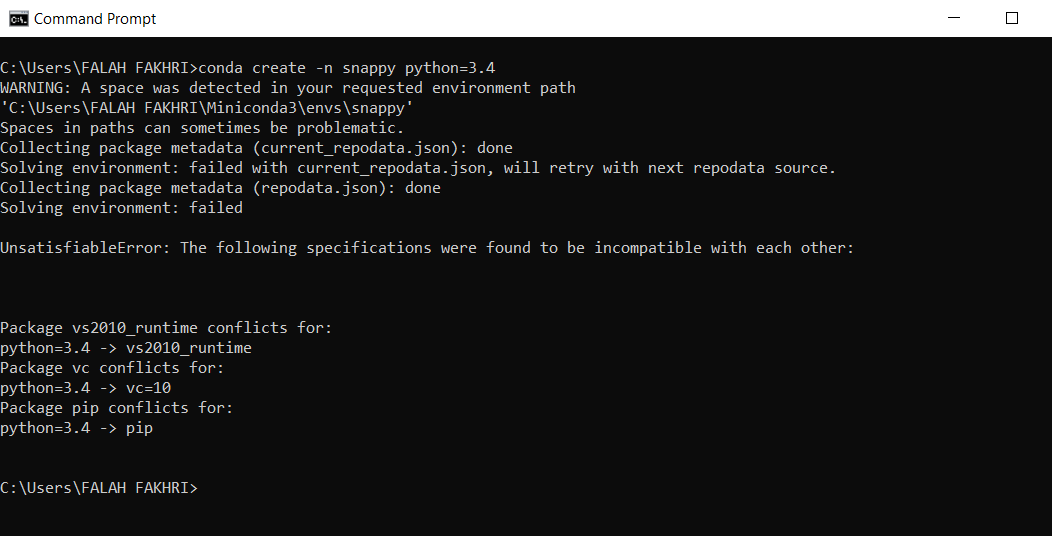 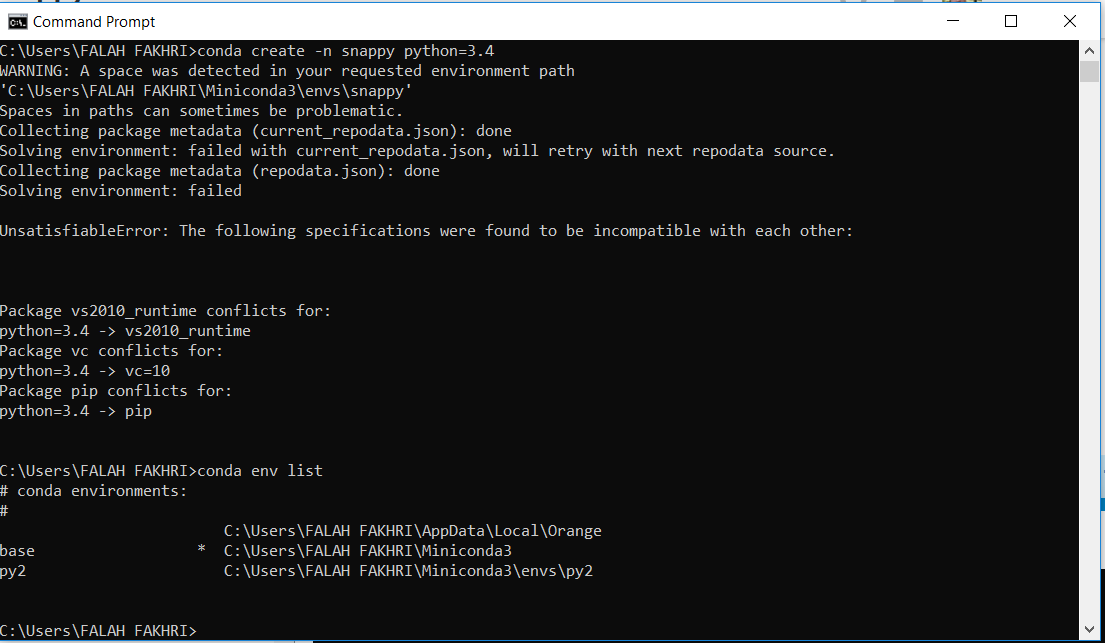 I would suggest you to re-install SNAP and select python 3 for configuration not pytho2. Then follow the same steps of conda virtual environment creation

I firstly removed py2 env, and then I uninstalled SNAP, reinstalled SNAP, and select python.exe, (3.7), what I already installed, but again the same error, 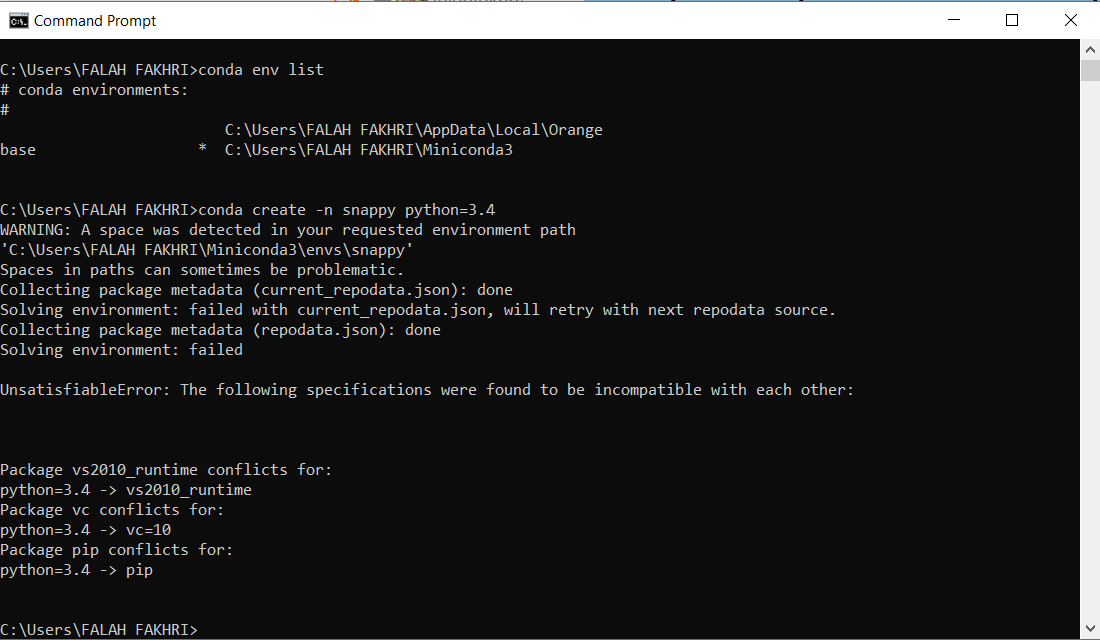 It also complains about vs2010_runtime conflict. I think this might be the Microsof visual C++ redistribution pacakge which is required for some applications on your PC. I do not know if you download a new version of this will solve the problem (https://www.microsoft.com/en-gb/download/details.aspx?id=5555).

If you cannot manage to make it work with anacoda, i would suggest you to use pipenv as an alternative. pipenv is teh official recommended python packaging tool. It resolves all the issues regarding python package versions.

have a look at his:

When working with a programming language, it is good not to leave gaps in your path. Instead of FALAH FAKHRI , it can be changed to FALAH_FAKHRI .

It could be risky, I also have asked the micorsoft supporters,

I checked it up and the newer version is available in my pc.,

i would suggest you to use pipenv as an alternative. pipenv is teh official recommended python packaging tool. It resolves all the issues regarding python package versions.

I installed it, But what is the step after that?

you can create a virtual environment with all the python packages you need as follows:

if everything runs smoothly in your environment, then you can add the snappy path in python (sys.path.append(path to snappy folder))

Try the above and see what happens.

Python 3.4 Not exist or I didn’t find it, from here (installer), in order to install it separately in my machine,

The official home of the Python Programming Language

I tried up to follow your instructions, to install python 3.4, accordingly I tried,

But I didn’t succeed to install it receiving the following message, 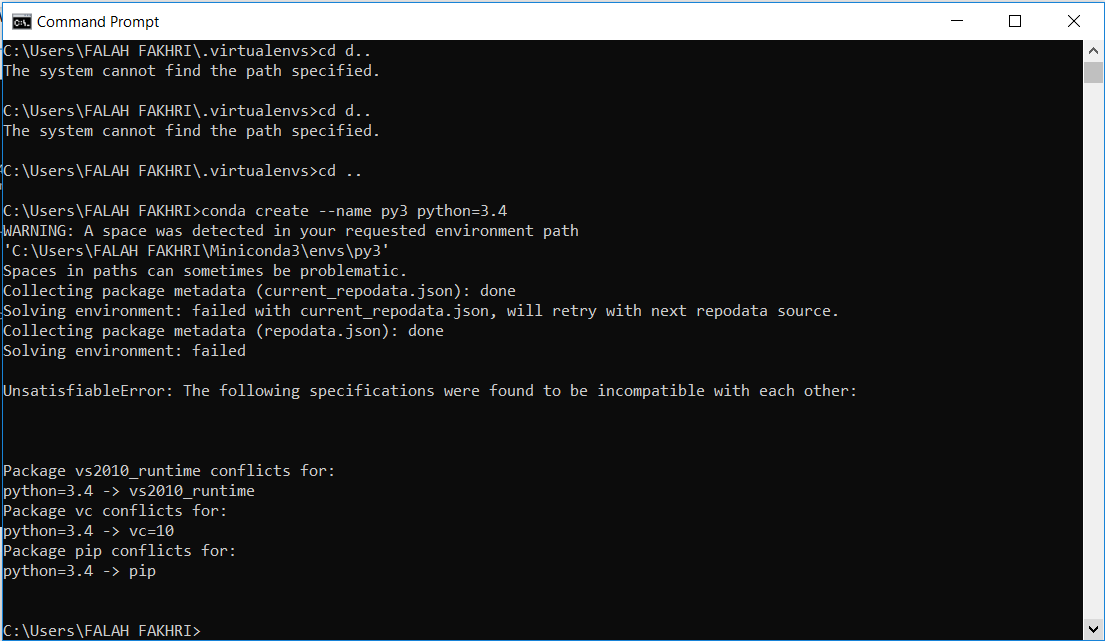 I didn’t succeed because python 3.4 is not exist 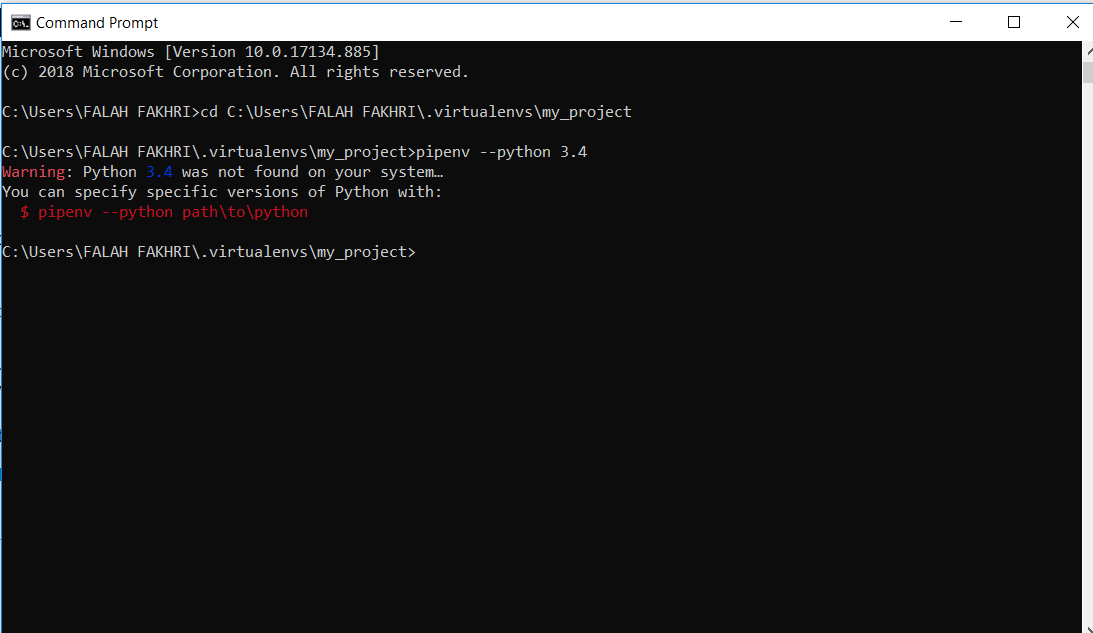 Hopefully, these steps will work for you. Trying to work with programming languages in windows is bit nightmare compare to linux. It requires lots of effort.

Thanks a lot for very nice instructions, However, I didn’t succeed to go further than, the highlighted readme makes the the issue more complicated for me, but what I did is following your smooth nice instructions. 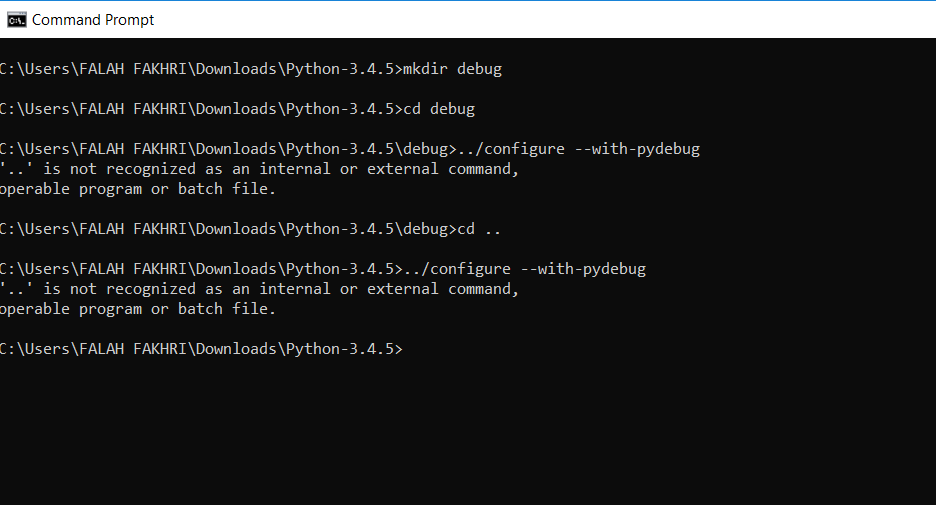 check the following two resources on how to fix this:

But in my case the windows\system32 is already defined, 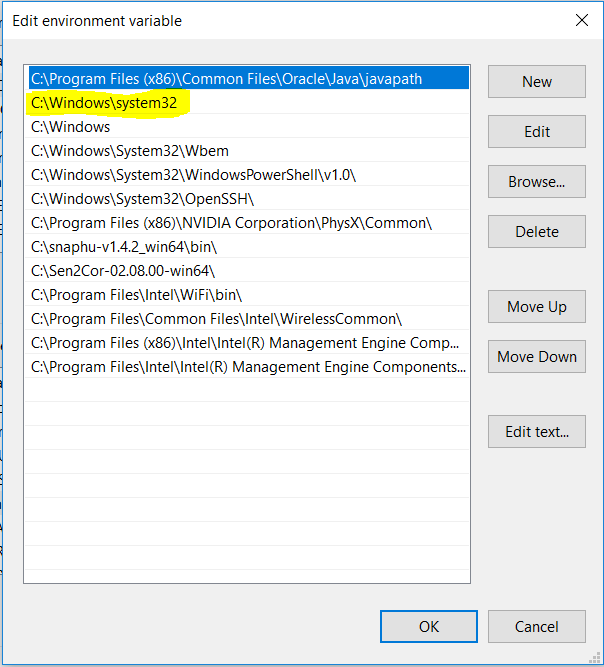 your path C:\Windows\system32, it looks like the system32 stars with lower case ‘s’. I do not know your windows path names but looking all of your paths it seems that system32 should start with capital ‘S’.
Might worth changing C:\Windows\system32 to C:\Windows\System32. and try to build the python from source
If again this does not work, it might need an update version of java