For preprocessing the SENTINEL 1 data, is the products should be subset
Layer/Band Stack
ABraun July 19, 2017, 7:37am #2

the RVI needs quad-polarized data so it is not possible.

This publication argues that one option could be having HH/HV data alone as HH and VV are related: 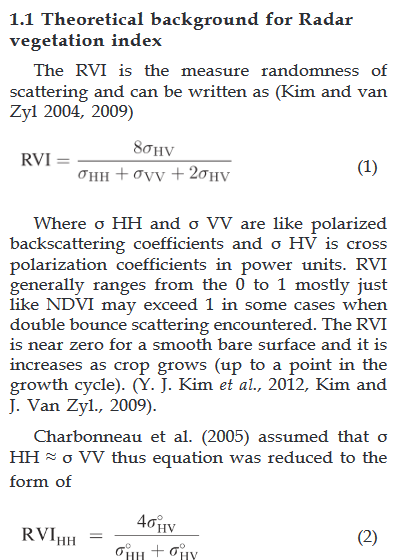 But as most of the Sentinel-1 data is VV/VH this isn’t an option either.

Thank you!
I actually did VV/VH and it works very well for me for an Ascending orbit and not so well for Descending. So I fought, to try something else may be.

Does anyone have an idea how this formula should look like if i have already db units? I first thought replacing the division by a subtraction would be correct according to the log laws but the result was strange.

You can use formula 1/db. It would be a conversion from db to linear units

Sorry, I’ve little bit misinformed you. I used that formula to convert from linear units to ratio (how many times backscatter is weaker than initial signal). I did 1/linear units.
For db I used a little bit more complicated formula to convert it to the ratio mentioned above
=10^(ABS(Value in db)/10)
I believe that this formula is good, but the results are slightly different from 1/linear units.
In any case I would like to use linear units which SNAP provides. It looks easier than tricky works wiht dBs.

alright, thanks for clarification!

So it would be that?

Yes, it would be like you’ve written.
If Sentinel-1 had HH polarization, I would use RVI formula too.
May be it would be useful for you, we used VV/VH polarization ratio formula for our researches. And after that, we found a good relationship with vegetation indices.

It’s very interesting! Would it be possible to read about your results?

I’ll keep you informed as soon as I have something to show.

didn’t work on it since then due to other priorities. But it is planned for the upcoming months.

Thank for an answer! Please let me know when you will recieve any results.

Hi,
I would like to know that still, it’s not possible to calculate Radar Vegetation Index using Sentinel-1 data?

I would like to know that still, it’s not possible to calculate Radar Vegetation Index using Sentinel-1 data? 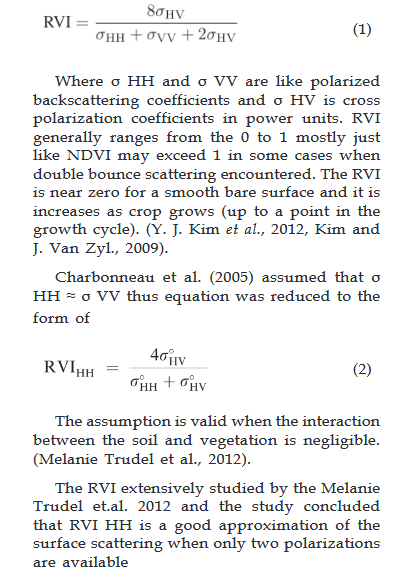 Thank you for your prompt reply.
According to the above-mentioned paper where it assumed that ϭHH ≈ ϭVV and since Sentinel-1 has VH and VV polarizations so can we modify the equation as follows?

Yes, this is an option. Different scatterers might be targeted by VV but in general, the index is about the contribution of volume scattering which is indicated by cross-polarized response.