I would like to bring back a topic that has been addressed a while ago in this forum but I find that no clear answer is available yet. I have a dataset of S1 and S2 images:

My doubt is about stacking both datasets after that. Based on some previous discussion on this forum, I have seen that some people have tried the corregistration tool available for SAR.

hello, i want to combine sentinel 1 and sentinel 2 image for land cover with some transformation of image fusion methods. I found a problem when i want to continue my research, I use Sentinel 1 GRD product, with IW sensor and have done pre-processing steps like calibration, multilook, speckle filtering, and terrain correction, then I combine the results of pre prosessing data sentinel 1 with sentinel 2 which has done semi-automatic clasification process using qgis , I combine these two data u…

But based on those replies:

IMO one should terrain correct the SAR images and reproject the optical images into the map projection of choice, and then perform stacking. Co-registration between SAR and optical cannot work very well since the geometry of the images is not the same (even though it is similar if the the area of interest is relatively flat).

This is the initial offset selection in the CreateStack. There isn't orbit information in the Sentinel-2 product so you'll need to use Geolocation. Follow the advice above by @mengdahl and terrain correct the SAR and use the same map projection with the optical then just use CreateStack with Geolocation for the initial offset and bilinear resampling.

So, what should be the procedure or at least the one leading to a higher accuracy? How can we check the accuracy (visualizing the overlapping images, adding some control points with known coordinates, etc.)

Which level/order of accuracy can we expect in terms of pixel alignment? (sub-pixel?)

Done correctly the accuracy is sub-pixel. Use collocate after the S-1 image has been terrain corrected.

Terrain-correct the SAR image into the same map-geometry and pixel size as the optical image , then collocate.

Which component of the terrain correction/map projection is leading to such high accuracy without co-registering both images?

SAR has inherently very high geometric accuracy (centimeter-level) provided that the auxiliary data is of high quality (like it is for S-1 for example).

Achieving centimeter accuracy presumes that one perform additional corrections for finer perturbations like atmospheric path delay, frame shift, and solid Earth tides. AFAIK, these are not included in the SNAP s1tbx processing.

The GeFolki Coregistration is now availavle in SNAP and allows coregistration of data of various sources (optical, radar, lidar):

I wanted to test the GeFolki coregistration and had a closer look at it. According to the homepage it is able to coregister two SAR products but also optical data with SAR data. Homepage Manual GitHub Two references: SAR/SAR coregistration (interferometry, change detection,…): Plyer, A., et al. (2015). A New Coregistration Algorithm for Recent Applications on Urban SAR Images. Geoscience and Remote Sensing Letters, IEEE, 12(11), 2198-2202. Other cases (optics/SAR, optics/hyperspectral…

Dear ABraun, did you succeed with GeFolki? Could you share experience?

I did not pursue this further yet, sorry.

Co-location of S2 and terrain corrected S1 should be straightforward - there should be no need to use GeFolki in the standard case.

I believe this solution could reduce as less as possible the introduction of artifacts. Later, a stacking operator should be used in order to stack together (multitemporal) Sentinel-1 and Sentinel-2 data.

I have shared a GPF graph that is preprocessing Sentinel-1 GRDH data taking into account this solution to snap output images to Sentinel-2 grids:

I have problem with stacking GRD data. I get the error : "please add source product ", I include the graph and the error pictures, do you have nay suggestions? I already processed and train-corrected the GRD data. 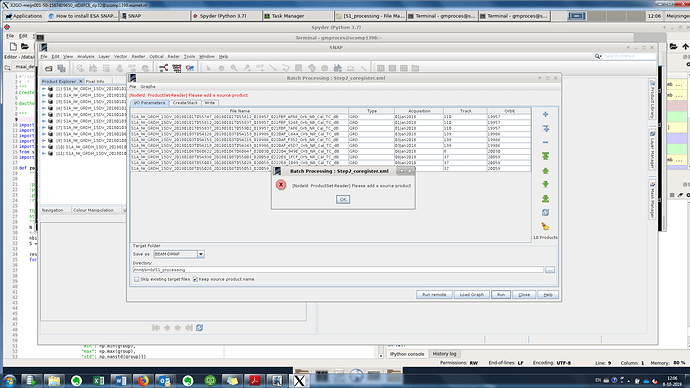 Is there a reason why you do this in a graph? In your screenshot there is just Read-Stack-Write, so this could be easier done (and probably avoiding the error) with the stack operator alone.

I want to automatize the process later in a bash file thats the reson I want to do it in a garph. I am not sure if it is possible in SNAP

ah, okay. I don’t know that actually but it should be something like this: How to Use gpt for the step CreatStack

About the error: Does it go away if you switch to the second or third tab and then back? I had this every now and then (basically the graph just had to update all parameters).